NEW DELHI: Apple has been asked to work closely with the Ministry of Electronics and Information Technology (MeitY) so that the iPhone maker’s plans conform to the government’s current phased manufacturing programme to the maximum extent possible, effectively ruling out any special fiscal sops for the company.

In a meeting two weeks ago among Apple, the Revenue Department, Department of Industrial Policy and Promotion (DIPP) and electronics ministry officials, the company made a presentation on its plans for component manufacturing in India, flagging concerns over the lack of a supplier base.
A senior official present at the meeting told ET that Apple cannot get exemptions outside the purview of the phased manufacturing programme for mobile handsets and tablets but minor adjustments could be made.
He was referring to the roadmap that seeks to progressively indigenise items such as chargers, adapters, batteries, mechanics, wired headsets, speakers, printed circuit board assemblies (PCBA) and exclude them from duty benefits.
Apple has sought import concessions for suppliers till it has a vendor base in the country. The revenue department will decide on custom duty exemptions for imported components based on the view taken by the electronics ministry, but it’s unlikely that such a concession will be made under the GST regime, which is expected to roll out on July 1. Apple had asked the government for a 15-year custom duty exemption on components. 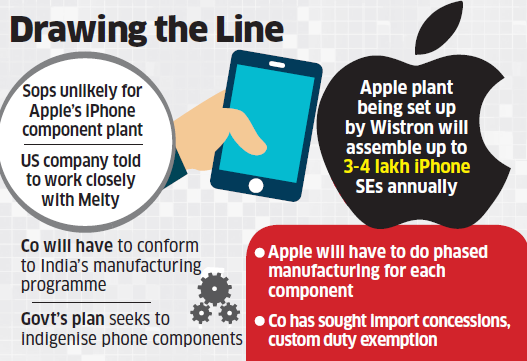 “The matter is in the hands of MeitY now and Apple will have to show it can do phased manufacturing in India for each component,” said the official cited above. “We will not go outside the purview of the present policy.” Apple told government officials about its manufacturing experience in Brazil where the cost of components has become too high due to the duty structure, adding that it does not want to put suppliers in a similar position in India.
The company declined to comment on the matter but referred ET to a statement issued in January.
“We’ve been working hard to develop our operations in India and are proud to deliver the best products and services in the world to our customers here,” it had said at the time. “We appreciate the constructive and open dialogue we’ve had with government about further expanding our local operations.”
Apple wants to make India a major manufacturing hub after China and Brazil and is set to kick this plan off with the Karnataka plant being set up by contract manufacturer Wistron to assemble 300,000-400,000 iPhone SEs annually.
The company wants to scale up manufacturing in India by establishing its supplier base in the country in the long run. Apple currently manufactures and exports chargers through a contract manufacturing facility in Chennai.
An inter-ministerial group including senior officials of the industry, environment, IT and revenue departments had met Apple’s representatives to discuss its wish list in January.
India provides 20% capital subsidy for units engaged in electronics manufacturing for 10 years under the Modified Special Incentive Package Scheme. Other companies such as Samsung operating in the same sector have started sourcing parts from within the country while also exporting products made at its plants in Noida and Sriperumbudur.
Read more at:
http://economictimes.indiatimes.com/articleshow/57998586.cms?utm_source=contentofinterest&utm_medium=text&utm_campaign=cppst