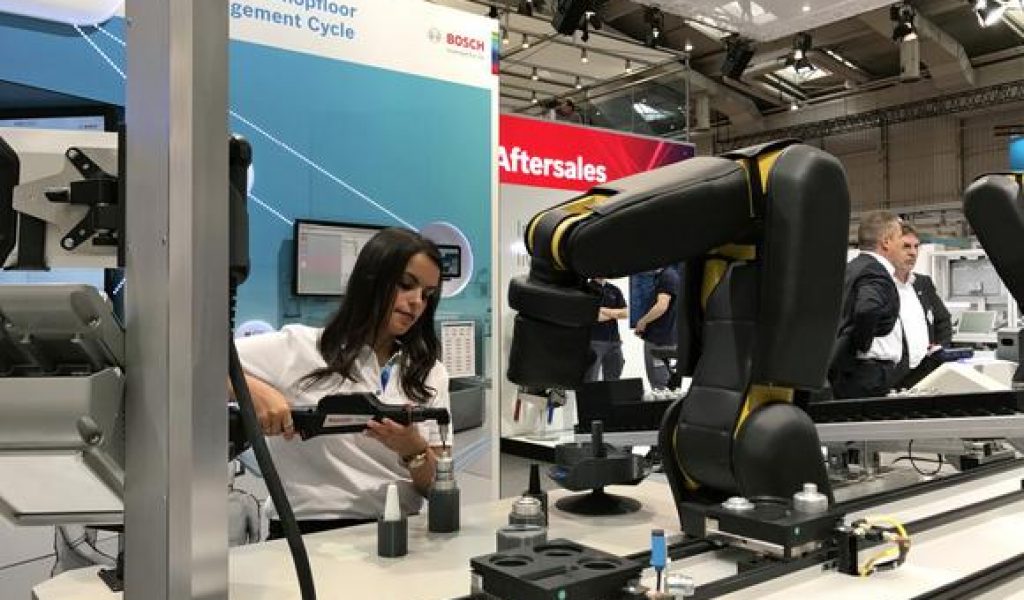 by JIRO YOSHINO and KOSEI FUKAO

HANNOVER, Germany — Artificial intelligence took center stage at the Hannover Messe 2017 trade show that opened Monday, with many manufacturers showing how systems crunch data gathered via the “internet of things” to predict breakdowns and optimize production.

The robots employ image recognition to detect scratches on parts surfaces. If told in advance how minor scratches can be to ignore, they can learn and enhance accuracy. Humans are spared repetitive, detail-oriented work, and missed defects can be reduced.

Hitachi displayed AI technology for improving productivity and quality. Temperature, pressure and other data from sensors at a production facility are analyzed by a cloud-based AI that suggests adjustments to machine settings. The AI will change settings and even predict breakdowns under a new system the Japanese company expects to commercialize over the next year or two.

Industrial machinery makers are sinking increasingly large sums into research toward their ultimate goal of AI systems that run factories entirely on their own. Many have joined hands with information technology companies over the last year in hopes of maximizing savings.

A key player is IBM, which spends billions of dollars annually on AI research and continues to improve its technology. Industrial machinery manufacturers are eager to partner with the U.S. company. Siemens, Bosch and Mitsubishi Electric have all teamed up with IBM, whose Watson IoT technology drew crowds here.

Chinese players boosted their presence at the fair. They accounted for 1,300 of the 6,500 exhibitors — second only to German companies.

JK-Tech is demonstrating a robot that collaborates with human factory workers, aiming to bring it to market by year-end.

Safety is a must for collaborative robots. The machines need to be aware of their surroundings so as to avoid hitting their flesh-and-blood co-workers, for example. Japan’s Kawada Robotics, Rethink Robotics of the U.S. and Bosch are leading in the field, while Chinese companies are increasingly catching up as they leverage low costs.