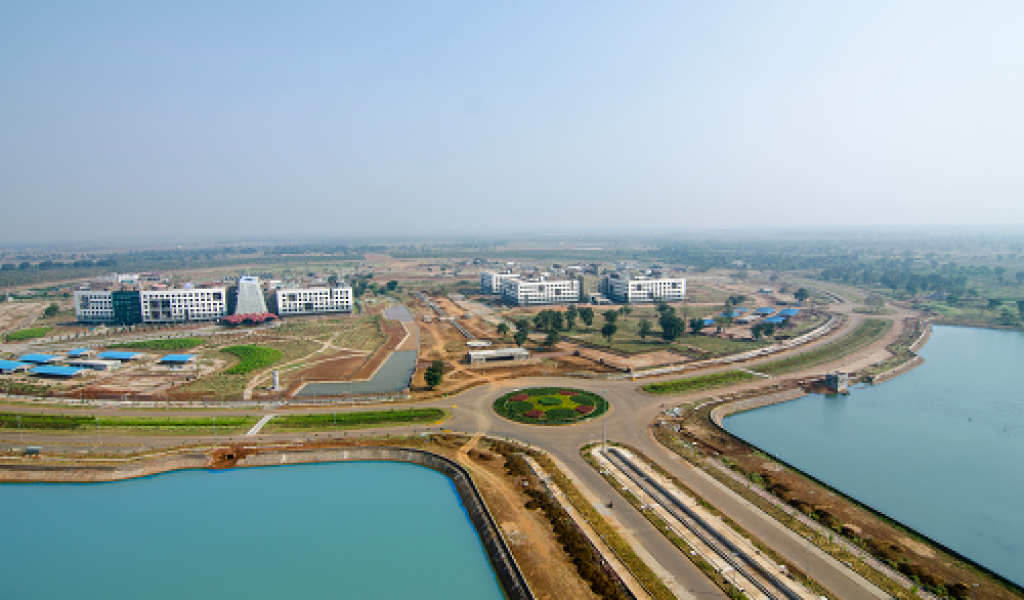 On November 1, 2000, Chhattisgarh—the 26th state of Union of India—came into existence after the division of Madhya Pradesh. Seeing the plight, neglect and slow development of the region, former Prime Minister Atal Bihari Vajpayee decided to create the new state of Chhattisgarh. On its first Foundation day, all that Chhattisgarh had were unexplored reserves, an undermined local population, a few dams and insurgency concerns. The birth of Chhattisgarh made the impression that another backward, underdeveloped and gloomy region would now get recognition on the map of India.

16 years later, Chhattisgarh has broken all pre-conceived notions and is being hailed as one of the fastest growing states with a view towards inclusive development.

Among the many successful policies and development projects, one of the most ambitious ventures by the state government is Naya Raipur, Chhattisgarh’s new capital city, which was recognized as world’s first ever integrated township in January 2017.

Environmental issues are considered to be a global concern today, and much remains to be done for effective conservation. In Naya Raipur, 27% of the land is solely devoted to greenery and the region’s environmental policies make it the first Greenfield Smart City in India.

Smooth and safe cycling lanes are constructed throughout the city, promoting the use of non-motorized transport systems. Apart from minimizing air pollution, steps have been taken to conserve water, and every building in Raipur will have effective and compulsory rainwater harvesting systems. The NRDA is maintaining 55 reservoirs in the region, including three lakes.

You might also like: As an Engineer He Earned Rs 24 Lakh. As a Farmer He Earns Rs 2 Crore!

Public buildings should not only have this system but should be erected on the basis of green building concept. Green buildings use less water, optimize energy efficiency, conserve natural resources, generate less waste and have minimum impact on environment. The offices of NRDA and Housing Board Corporation are examples of such buildings, and a visit to the NRDA shows the building sparkling with sunlight.

“We don’t feel the need of lamps and bulbs here as sun rays spread widely, illuminating every inch of the office,” said an employee of NRDA office.

In a bid to offer wholesome recreation for local residents, an amusement park is currently being built in sector 24 alongside Jhanjh Lake for water sports facilities. A club house in Sector 24 will offer fitness, lounge, theatre and other amenities while the Immersive Dome Theatre, streaming five-dimensional movies, is already entertaining Raipurians. Ekatm Path, a 2.2 km boulevard is a paradise for morning walkers, and reminiscent of Raj Path in New Delhi.

Naya Raipur is also gearing up to be a major education and health hub in Central India, with a bevy of operational and forthcoming institutes.

Access to quality education and the presence of premier institutes has a wider impact on overall culture of study and learning on its surroundings. Hidayatullah National Law University, ranking sixth among the National Law Universities in India, shifted its campus in 2009 from Raipur to Naya Raipur. Its students and staff are considered among the founder residents of the city.

IIT Naya Raipur (IIITNR), a joint venture of state government and NTPC, commenced with its first batch in 2016. Apart from this, KIT, ITM University and State Administrative Academy are also running in Naya Raipur while IIM Raipur and Ayush University are under construction. A number of schools are attracting students from all parts of the state.

A state-of-the-art sports village is being built in Sector 3, ensuring world class facilities for indoor and outdoor sports. An area has been marked for a golf club in sector 38 while the Shaheed Veer Narayan Singh International Cricket Stadium has hosted three seasons of IPL and is recognized as India’s second in terms of capacity. David Warner, vice captain of the Australian Cricket Team once said that the Naya Raipur Stadium reminded him of Melbourne Cricket Ground.

With new hospitals being developed in the region, Naya Raipur negates the need to travel to other cities for healthcare. No city, town or state can be considered developed until it has the latest and reliable medical facilities. Satya Sai Sanjeevani Hospital, situated in Naya Raipur, provides free medical treatment and operation facilities for heart patients without discrimination. As the hospital provides these services and facilities free of cost, it has no billing counter. More than 3000 surgeries have been done here till date for free.

Sankara Eye Hospital, Vedanta Cancer Hospital and All India Institute of Medical Sciences (AIIMS) Extension are other hospitals in the city, both currently under construction.

Smart governance is the key in ensuring good governance, and use of technology and simpler interface for delivery of governance services is critical.

Mobile applications and online portals will provide municipal services like billing, tax payment and issuing birth certificates, marriage registration and information about the city. People will have access to these basic services on their fingertips.

Naya Raipur also boasts an all-encompassing surveillance system to cover all the nine entry and exit points, bus stops, public buses, public offices and other important spots of the city. Utility services such as water supply, power supply gas pipeline, LAN cables would be tracked by computerized SCADA system so that any fault can be seized precisely and timely. A tender of ₹100 crore is currently under process for these projects.

In its smart city initiative, NRDA is conducting an online citizen survey, seeking priorities, demands and innovative suggestions from people. This is the first time a newly developing town plan is being prepared with public involvement.

“By studying and visiting the best townships across the world, we have tried to mitigate chances of all types of challenges that would occur in any township. Our objective is to make a sustainable, secure and self sufficient city of tomorrow” told SR Shrivastava, chief engineer, NRDA.

The smart capital is also accoutred with an underground utility corridor which means that services including water supply, sewerage, telecom and electricity are developed underground. Roads are lit with LED lamps and garbage containers are set up at every 500 meters across the main streets. Also, NRDA is in consultation with institutes like IISC and IIT-Bombay to develop a suitable plan for waste management and disposal system for the city.

The major government offices here include Mantralaya named Mahanadi Bhawan and the Directorate named Indravati Bhawan. Over than 32 departments with more than 2500 employees have started functioning in Naya Raipur. NRDA office, police headquarters, CG housing board corporation, etc. are already operative here and the Central Business District is also under construction for government, semi government and private offices as well as an office complex in Sector 24 for corporate organisations.

The government also aims to make Naya Raipur a new destination for global IT and services industries.

Sector 22 is a hub for Special Industry Development specifically designed for IT, ITeS and services industries. 194 hectares of land in Sector 5 is reserved for industries such as banks, automobiles, cold storage and handloom. An electronic manufacturing cluster was also inaugurated last year and the city will also have a Special Economic Zone for gems and jewellery. It is worth noting that only non-polluting industries are allowed in Naya Raipur.

A new railway line is being constructed to bring the broad gauge to Naya Raipur and four railway stations will be built by NRDA. The Swami Vivekananda International Airport which is around 10 km from Naya Raipur was decorated with a National Tourism Award and recognized as the best non-metro airport in India in 2016.
With a variety of excellent amenities in every important sector Naya Raipur is regarded as the first integrated township of the world. Among its early achievement was a 15-day visit from an Afghan delegation to train under NRDA on constructing a smart city in Afghanistan.

Naya Raipur has a lot to offer to everyone. From green belts and cycling tracks in the middle of open fields to colossal structure, this is a place full of pleasant surprises. As locals say, Chhattisgarhiya sable badiya, meaning Chattisgarh is the best.

The views and opinions expressed in this article are those of the authors and do not necessarily reflect the official policy of The Better India.