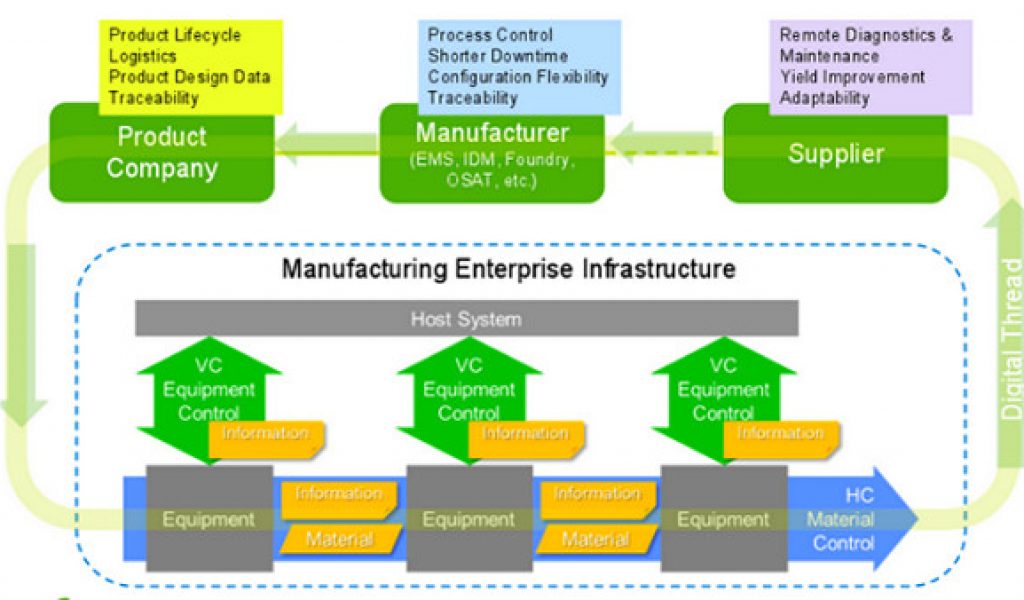 Some vendors are calling for the Electronics Manufacturing Service sector to adopt some version of automation standards already in use in fabs.

Contract manufacturers have started buying equipment used in wafer fabs as they move beyond processes such as wire bonding to bumping, and this shift is motivating some vendors to call for the Electronics Manufacturing Service (EMS) sector to adopt some version of automation standards already in use in fabs.

Some customers say they want the thread of data that follows their products through the design and fabrication stages to continue to flow through to final systems assembly.

“All of this now demands production tools that can communicate using a standard protocol,” Gamota said. “It could serve the industry best if we started with something established that has shown its capacity to evolve, like a light version of the SEMI Generic Model for Communications and Control of Manufacturing Equipment,” he said.

Gamota called for adopting a version of the so-called GEM standard because “with technology evolving so fast, it would take too much time and too great an investment to start on something new from scratch.”

Others seem to agree. The Association Connecting Electronics Industries, aka the IPC packaging trade group, recently conducted a survey on the topic through its connected-factory subcommittee. One major takeaway was the need for standards that kept up with the accelerating pace of technology change.

The SEMI trade group is sharing the IPC’s survey results with printed circuit associations in Taiwan, Japan and Korea. It hopes to organise a roundtable on the issue later this year. Last year, the Taiwan group released a proposal for a draft standard based on GEM.

A SEMI initiative in smart manufacturing is already working on sharing learnings and extending established models from the wafer fab to final assembly.

The group is starting work on a guide to ease the integration of advanced automation for chip packaging. It also formed a collaboration to demonstrate cost savings in the fab from shared development of deep learning software and controls for some common problem areas.

“Automating a packaging facility is an overwhelming task to start,” said Hem Takiar, vice president of packaging engineering at SanDisk who led the effort to automate SanDisk’s packaging operation. “Integration of communication with suppliers and customers has to be an integral part of factory automation,” he said.

“The end customer is demanding real-time visibility into the supply chain to understand where their chips and boards are, so SEMI and its members are now focusing on how to create better communications across the industry,” said Tom Salmon, vice president of collaborative platforms at SEMI, who’s managing the effort.

Figure 1: To enable smart manufacturing, vendors need to collaborate on getting their production equipment to interoperate and support factory analytics and data management systems. (Source: SEMI)