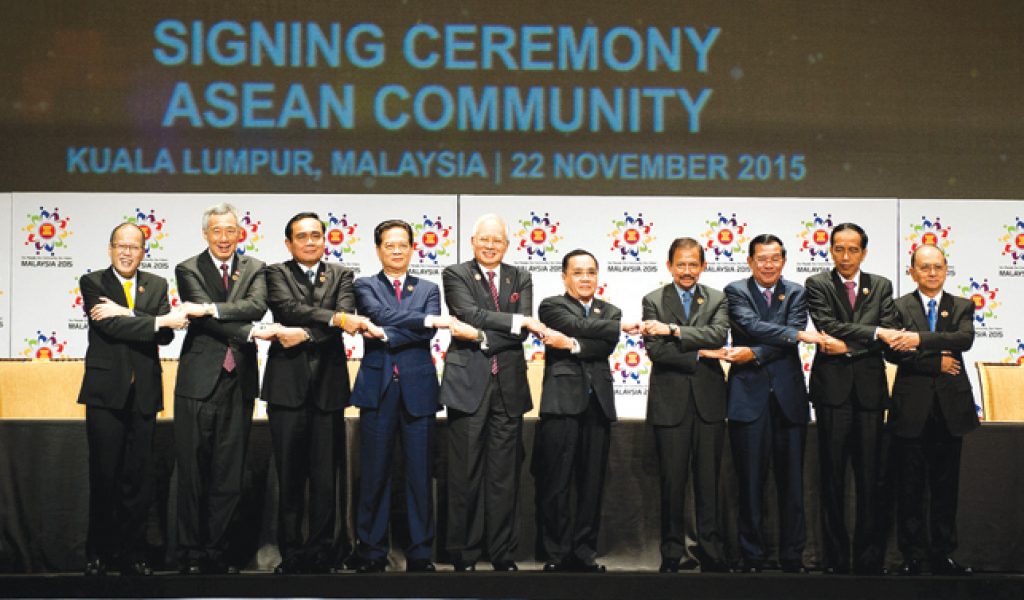 Leaders of 10 ASEAN member states hold hands during a signing ceremony for the establishment of the ASEAN Community in Kuala Lumpur, Malaysia, Nov 22, 2015. One of the pillars of this initiative is the ASEAN Economic Community. / Courtesy of ASEAN Secretariat

South Korea is struggling to find an economic breakthrough to escape from a low-growth trap based on structural issues both at home and abroad weighing heavily on Asia’s fourth-largest economy.

Given that Korea is a small, open economy with heavy dependence on trade, now is the time for Korea to develop a new market to revitalize the sagging economy.

For Korea, the launch of the ASEAN Economic Community (AEC) at the end of last year is great news because it is expected to change the landscape for the global economy and bring huge opportunities for Korean firms.

The AEC is an agreement among 10 ASEAN member nations to create a single market and production base by removing all barriers, including those on trade and investment. 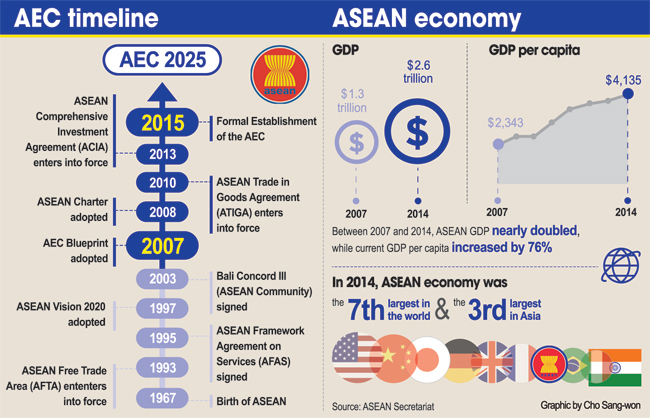 By maintaining its growth momentum, it is on track to be the world’s fourth-largest economy by 2050.

The partnership between ASEAN and Korea has made remarkable progress since relations were established in 1989.

Experts stressed that Korea should step up efforts to gain a stronger foothold to reinvigorate the Korean economy before the burgeoning market becomes too crowded.

“The launch of the AEC is an ongoing process. We expect to see meaningful change over time. If it materializes as scheduled, the region will emerge as a new market soon,” South Korean Ambassador to ASEAN Suh Jeong-in told The Korea Times.

“In this regard, Korean firms need to see the region as a single market and take action at an early stage of the integration process, with the vision to look 10 years ahead.”

If Korea finds a new growth engine in the ASEAN region, it will help the Korean economy get back on track.

The Korean economy has been growing by less than 3 percent in recent years and is forecast to continue the trend for 2016 due to falling exports and sluggish domestic demand.

In particular, since there is high demand from ASEAN nations to learn from the development experience of Korea, which achieved rapid growth in such a short time, the nation can benefit most from the ASEAN market.

The AEC aims to create a single market with a free flow of goods, capital and skilled labor across borders within ASEAN — Brunei, Cambodia, Indonesia, Malaysia, Myanmar, the Philippines, Singapore, Laos, Thailand and Vietnam.

Once the ASEAN region, which grows over 5 percent annually, becomes an integrated market, Korean firms will see a lot of opportunities created by the 10-member bloc’s efforts to strengthen physical, institutional and people-to-people connectivity in the region.

ASEAN nations are prioritizing construction of more railways, expressways and communication networks to maximize the effectiveness of the AEC and improve regional competitiveness, which requires large-scale infrastructure projects.

According to a report by auditing company KPMG, an estimated $60 billion is needed per year until 2022 to fulfill all the infrastructure needs of the region. The energy and transport sectors are expected to make up the biggest proportion of this investment.

Also, the rise of middle-class households’ purchasing power in the region is expected to create a larger market for Korean consumer products.

According to a forecast by consulting firm Baker and McKenzie, the number of middle-class households will more than double to 80 million by 2018.

Since hallyu, or the Korean wave, is popular across ASEAN, this will help large and small firms alike develop new markets in the region.

Many Korean consumption-oriented firms, including Samsung Electronics, AmorePacific and CJ Group, are already shifting their focus to the ASEAN market.

Korean financial players, such as Shinhan Bank, Hana Bank, Korea Investment & Securities and Korean Re, are also gearing up to strengthen their foothold.

Market analysts say that in order for Korea to benefit from the new opportunities, it is important to take risks by moving swiftly and strategically.

“Japan is already a massive player in the region and China is clearly ramping up its efforts to build relationships there,” HSBC ASEAN economist Su Sian Lim said.

“Once China becomes more entrenched in the region, it would be more challenging (for Korea). It is to Korea’s advantage to act swiftly and strategically. If companies take a more conservative approach, then they are always late to the game.”

Ambassador Suh said Korean firms should come up with a strategy for the entire ASEAN market while employing tactics tailored to each country because the 10 member countries are all different in regards to economics, politics and culture.

“They should try to see both the forest and the trees and take a ‘think regional, act local’ strategy to find an optimal place for a regional production base to cover the entire ASEAN market,” she said.