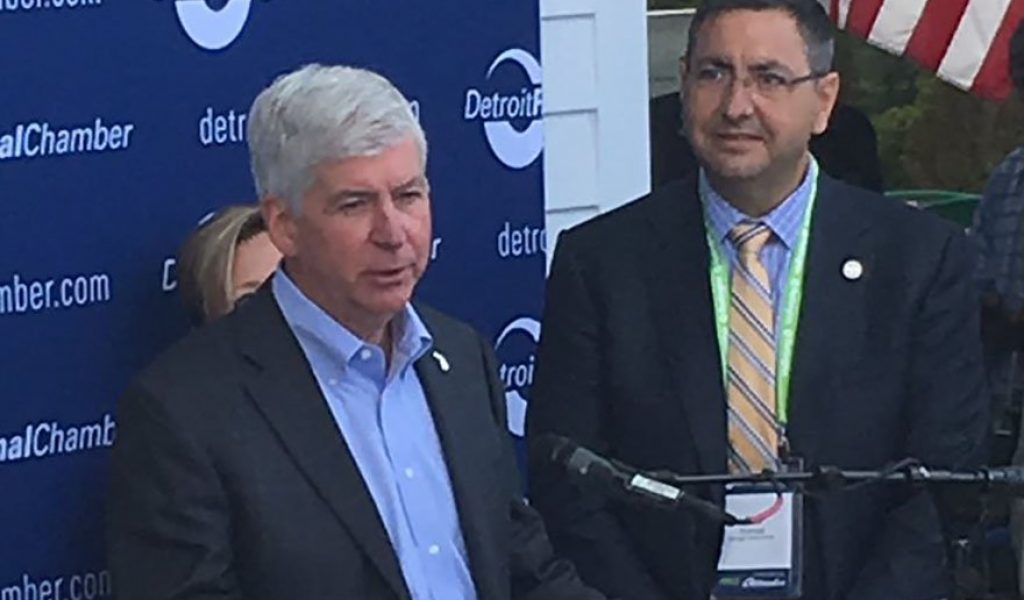 Gov. Rick Snyder used a news conference Thursday during the Mackinac Policy Conference to lobby lawmakers in the state House to send legislation to his desk that would allow larger companies to retain a portion of their income taxes paid on new hires. At right is state Sen. Jim Stamas, R-Midland, the lead sponsor of the three-bill package.

State economic development officials are trying to lure a $4.2 billion investment by Taiwan-based Foxconn Technology Group to create 5,000 jobs in Southeast Michigan for the assembly of liquid-crystal display screens for the automotive, aviation and defense industries, according to state government sources.

One state source who requested anonymity confirmed to Crain’s that global electronics assembly giant Foxconn, whose official name is Hon Hai Precision Industry Co. Ltd., is considering an expansion in Michigan in the magnitude of $4.2 billion and 5,000 jobs. A second source confirmed the potential number of new jobs that could be created if the Snyder administration can win over an unspecified Asian company.

The push comes after Snyder made a strong endorsement of a new set of tax incentives that’s making its way through Michigan’s Legislature.

Gov. Rick Snyder is making a one-day trip to Asia this weekend as part of an effort to lure a major electronics manufacturer, according to one state source who spoke on condition of anonymity.

Snyder on Friday morning did not deny he was headed to Asia this weekend to meet with Foxconn representatives when caught by a Crain’s reporter walking into the Shepler’s Mackinac Island Ferry dock. The governor has been on the island all week for the Detroit Regional Chamber’s annual Mackinac Policy Conference.

“Well, I’ve got a full weekend planned,” Snyder said. “Most people wouldn’t be interested where I’m spending my time.”

When asked whether new tax incentive legislation is vital to getting Foxconn to build a plant in Michigan, the governor reiterated his support.

“Well, I made my statement yesterday: This bill is important to some real things going on,” Snyder said.

“I’m not trying to be difficult, but you can appreciate where I’m coming from,” Snyder told a Crain’s reporter.

One state source told Crain’s on Friday that the Michigan Economic Development Corp. has a nondisclosure agreement in place with Foxconn, suggesting negotiations between the state and company have reached an advanced stage.

The Detroit News reported Thursday night that Snyder and Detroit Mayor Mike Duggan were planning to fly to Japan this weekend for a possible meeting with Foxconn representatives. A source said representatives from the Detroit Economic Growth Corp. were not expected to travel with Snyder and Duggan.

On Thursday, Snyder publicly ramped up pressure on the Michigan House to pass the so-called “Good Jobs for Michigan” legislation, hinting that the state needs the new tax incentives to land a big employer.

“There is some urgency, in my view, to get this done,” Snyder said Thursday. “We could lose opportunities if this doesn’t take place in the next month or so.”

The legislation would capture a portion of income taxes generated by newly created jobs for employers who hire at least 250 new workers or create at least 500 jobs in the state and meet specific wage requirements. A similar legislative package cleared the Senate late last year, but died in the House.

A source told Crain’s that the legislation was slated to resurface in the fall, but new prospects have accelerated the timeline for passage to before the Legislature breaks for the summer in June.

House Speaker Tom Leonard, R-DeWitt, could be an obstacle to getting the tax incentives passed as quickly as Snyder would like it.

“I don’t like the idea of government picking winners and losers,” Leonard told Crain’s on Friday. “I would like to know whether or not there’s assurances that this company will come if this package of bills are passed, how many jobs it will create and how much the incentive will be for this particular company.”

Senate Floor Leader Mike Kowall, R-White Lake Township, said Friday he had not heard Foxconn’s name, but that state economic development officials have indicated there’s a large employer that could be lured with the tax incentives.

“I was told that there’s somebody that they have on the line, and the bill would be helpful,” Kowall told Crain’s. “We’re constantly talking to companies from Japan and the Eastern Rim to get them here to the state.”

Foxconn’s chairman is Terry Gou, who in January said there was a tentative plan to invest more $7 billion in the U.S., according to a CNN report at the time.

That investment could bring 30,000 to 50,000 jobs. Reuters reported in April that Gou said following a meeting at the White House that his company planned a “capital intensive” U.S. investment.

The company has taken criticism for worker conditions at its plants in China after a wave of suicides; in 2010, according to a 2015 Re/code story, 12 Foxconn workers killed themselves by jumping off rooftops. The article says Foxconn employs about 1.4 million in mainland China.

A source said Friday morning that Foxconn has quietly for a couple years been exploring a possible plant in Michigan that would require about 300 to 500 acres of land in metro Detroit.

Spokesmen for Snyder and Duggan declined to comment Friday.

Sandy Baruah, president and CEO of the Detroit Regional Chamber, said Friday that he couldn’t comment on any ongoing talks with companies interested in relocating to southeast Michigan. But the chamber president said economic development officials need the tax incentives to compete with other states for jobs.

“Michigan is kind of under-armed when it comes to available enticements to lure large projects that are job-generating into the state,” Baruah said on the final day of the chamber’s policy conference. “This is a piece that we’re missing and we’re looking to be able to do it without costing the taxpayers money.”

State Sen. Jim Stamas, R-Midland, the lead bill sponsor, told reporters Thursday the package differs from credits offered under the defunct Michigan Economic Growth Authority program because it offers a degree of certainty to the state. It would be limited to 15 agreements with companies annually, and $250 million in total withholding. Companies would lose the incentive for a given year if they fail to retain the required number of new jobs.

A source said there could be additional amendments in the House to account for companies that create more than 500 jobs.

Michigan has been successful at attracting companies to the state, Snyder told reporters, but they have tended to be smaller companies. The MEDC has cash incentives it can offer to businesses, but incentive supporters say the state does not have enough tools to compete with other states that lure companies with sweeter deals.

At the Mackinac conference on Thursday, Snyder characterized the legislation as vital to luring companies to bring a collective thousands of jobs to the state, open up new industries and expanding Michigan’s traditional manufacturing base.

Snyder was planning to tour the Soo Locks on Friday in Sault Ste. Marie.