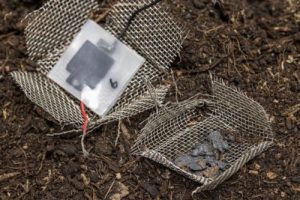 After a few hundred charge and discharge cycles, the battery’s internal resistance becomes significant and can’t be used further. Supercapacitors on the other hand, don’t rely on chemical processes and can be charged/discharged an infinite number of times until they get bulged. But supercapacitors have considerably less energy density as compared to li-ion batteries.

Supercapacitors have been used in circuit protection and as short-term back-up supplies, but they are now being employed in various applications such as EVs, renewable energy harvesting, wearables, IoT applications, etc. With the rise in applications of supercapacitors, it is necessary to think about e-waste generated after the disposal of these capacitors.

To combat this problem, researchers at the Empa in Dübendorf, Switzerland, led by Gustav Nyström, have made a high-performance supercapacitor entirely from recyclable, non-toxic materials. The researchers made an electric double-layer capacitor (EDLC) from a disposable paper-like material. The newly developed supercapacitors resists pressure and shock, and works even at freezing temperatures, making it an environmentally-friendly option for powering Internet of Things (IoT) devices.

“At the end of its service our new EDLC can be processed as a noncytotoxic compostable material or simply be left in nature,” says Xavier Aeby of Empa’s Cellulose & Wood Materials lab. “Indeed, the device disintegrates and loses 50% of its mass within nine weeks, leaving only a few visible carbon particles.”

Development of non-toxic supercapacitors
The device was made using a method called direct-ink writing. It is a promising technique for the sustainable fabrication of energy devices. In this technique, viscoelastic gel ink is extruded line-by-line and layer-by-layer from a printer nozzle to form three-dimensional objects. The ink contains only non-toxic and renewable materials like nanocellulose, glycerol, carbon powder and water as the solvent. The device demonstrated a high capacitance of 25.6 F per gram active material at an operating voltage up to 1.2 V.

The newly developed supercapacitors are tested for suitability for real-world applications. The researchers printed six super capacitors connected in series on a 3D surface and they found that the system stores electricity for several hours and is capable of powering a standard digital alarm clock.

The researchers say that such capacitors could power a sensor or micro-transmitter for hours after being charged using an electromagnetic field, making them ideal for IoT applications. The number of microdevices is also expected to increase as “point-of-care” diagnostics, such as self-testing devices for diabetics, come into more widespread use.

The scientists reported their work in Advanced Materials and indicated that they are now planning to improve the amount of charge that can be stored in their non-toxic supercapacitors.