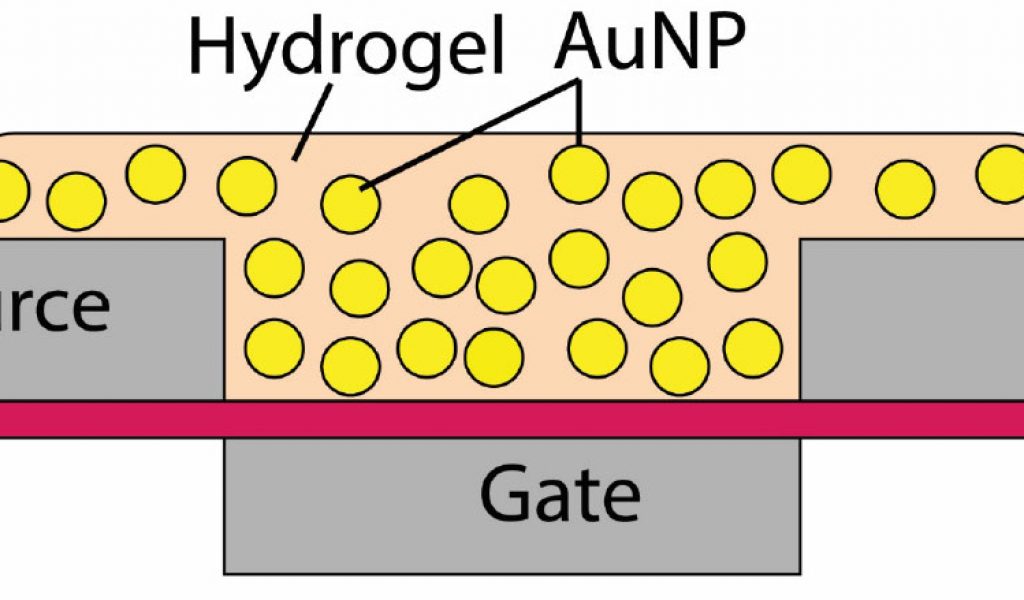 By Dexter JohnsonHydrogels are essentially a gel in which the liquid component is water. They have been shown to act as a kind of power source or even as kind of stretchable touch screen that you could wear.

Now researchers at the University of Utah have used hydrogels to make a switch for transistors that could be called “squishy” because of their flexibility and stretchable quality. In research described in IEEE Electron Device Letters, the Utah researchers fabricated a metal-oxide hydrogel field-effect transistor (MOHFET) with a channel composed of a hydrogel embedded with gold nanoparticles.

The switching mechanism for the hydrogel is quite different from a typical silicon-based switch, which is turned on by making the channel more conducting. In gold nanoparticle switches, the particles are always conducting and they are brought closer to the device electrodes to turn on the device.

In this particular device, the biggest challenge for the researchers was finding the correct combination of hydrogel structural compliance and gold nanoparticle density to enable large changes in the switch’s resistance as it was turned on and off.

After having achieved the switching effect they were looking for, Massood Tabib-Azar, a professor at the University of Utah and co-author of the research, says the biggest breakthrough of this work is that it shows a way for hydrogels to be used as a structural and functional material for incorporating nanoparticles in switches, sensors, and other electronic devices.

“Many different types of quantum dots, nanoparticles, nanotubes, and nanowires have been synthesized in the past,” said Tabib-Azar. “However, we really do not have a good way of incorporating these unique materials in devices. Hydrogels have been around for sometime. They have some very unique properties that make them ideal materials for sensors.”

Tabib-Azar referenced the ability of sharks to detect 5 nanovolts per centimeter, which is equivalent to 1.5 volts over 3,000 kilometers. “[This] is equivalent to being able to detect an electric field generated by a battery hooked up to two electrodes: one residing in Manhattan, NY and the other one on the tip of the Florida Panhandle,” he said.

As for its electronic switching capabilities, Tabib-Azar concedes that hydrogels do not have the on/off ratios or speed of silicon-based switches, but he adds that this field is still in its infancy and can’t be compared to silicon. “What this does is open up a window for exploring different nanoparticles as switch materials,” added Tabib-Azar.