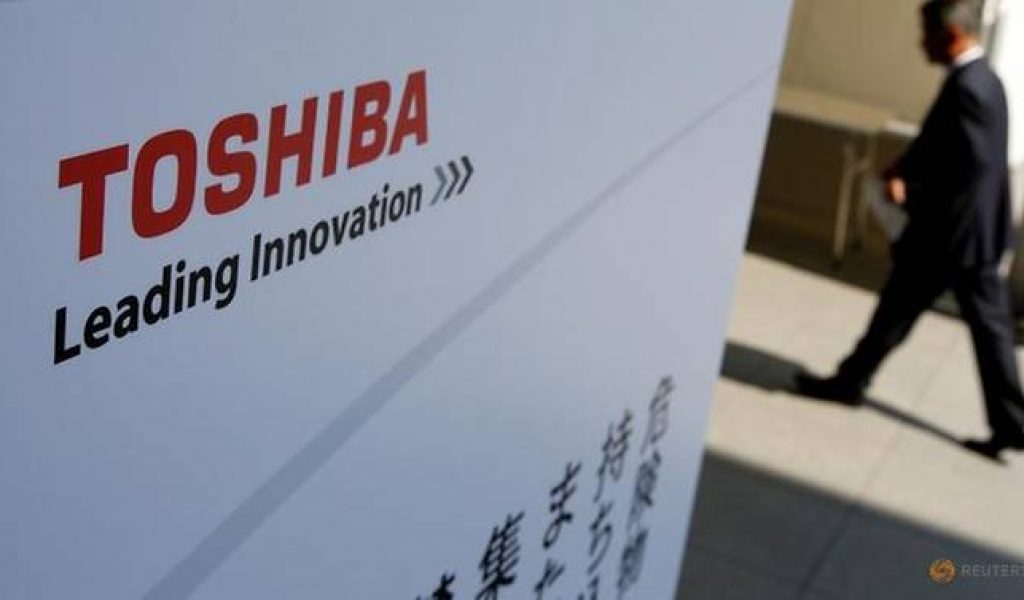 A hastily-assembled group of investors looks set to win the bid for Toshiba Corp’s prized memory chip business, but a lack of clear leadership or industry clout is raising questions about who will take tough decisions about strategy and investment.

TOKYO: A hastily-assembled group of investors looks set to win the bid for Toshiba Corp’s prized memory chip business, but a lack of clear leadership or industry clout is raising questions about who will take tough decisions about strategy and investment.

After a fiercely contested, months-long auction, Toshiba on Wednesday said a consortium of Japanese government investors and private equity firm Bain Capital was the preferred bidder, aiming to seal a deal worth some US$18 billion by next week.

The sale will provide much-needed cash for the electronics giant, which has been forced to divest part of its chip business to cover billions of dollars in cost over-runs at its now-bankrupt U.S. nuclear power business Westinghouse.

But the group of awkward bedfellows could struggle in the cash-intensive and competitive tech sector, famous for hairpin swings in consumer demand and a brutally small margin of assembly-line error, senior industry participants said.

Flagging a lack of industry expertise and cultural differences, the disparate consortium would likely need to bring in a leader from outside to run the core unit to be spun off from the world’s eighth largest semiconductor maker, they said.

“Chip chiefs must be someone like Carlos Ghosn, who exercised strong leadership in Nissan’s turnaround,” said Tsugio Makimoto, former Hitachi Ltd chief engineer, referring to the Brazilian-born boss credited with reviving the fortunes of car makers Renault and Nissan.

“It will be hard for a patched-together group like the Japan-U.S.-South Korea consortium to achieve such leadership.”

Japanese policymakers are notoriously reluctant to let big business failures hurt the wider economy, but state-led investors have a patchy history of turning around troubled corporates in the country.

In addition to Bain, the group includes state-backed fund, the Innovation Network Corp of Japan (INCJ) and the Development Bank of Japan. South Korean chipmaker SK Hynix Inc and the core banking unit of the Mitsubishi UFJ Financial Group Inc are in talks to provide financing.

A senior Toshiba executive said that anti-trust concerns around SK Hynix’s memory operations mean it would not participate in the management of the chip business.

“No one in the consortium knows the management of the memory chip business as SK Hynix would stay in the background,” the executive said.

Still, the group is seen by many analysts as being the most likely suitor as it would automatically gain an implicit stamp of approval from the Japanese government, which is keen to keep key semiconductor technology under domestic control.

Toshiba is the world’s No. 2 producer of NAND flash memory chips that are increasingly in demand from electronics makers as consumers look for ever larger long-term data storage.

INCJ’s past record in bringing Japanese electronic component makers back from the brink and aiding wider restructuring in the sector has yielded mixed results.

The group, a public-private partnership, five years ago cobbled together Japan Display from the ailing display units of Sony Corp, Hitachi Ltd and Toshiba.

The liquid crystal display maker has posted three consecutive years of losses and is now considering deeper restructuring despite receiving 75 billion yen (US$685 million) in investment from INCJ in December.

On the other hand, INCJ’s bailout of Renesas Electronics Corp in 2013 is considered a win, with its share price more than trebling to trade around 1,000 yen, from 300 yen at the time of its rescue.

However, Kuninori Hamaguchi, a semiconductor expert who is currently external audit and supervisory board member at Oki Electric Industry Co, warns Toshiba’s investment requirements are incomparably greater than those of INCJ’s past rescues.

“INCJ’s investment in Renesas is considered a success. Their strategy worked because they narrowed down their target to the automotive industry and focused on automotive chips,” Hamaguchi said.

“But Toshiba’s memory business is massive in scale. Flash memory will be central to data servers in coming years. It would be a capital battle.”

An INCJ spokeswoman said the fund plans to proceed with detailed negotiations to clinch a deal as a consortium, but declined to comment further. The Development Bank of Japan declined to comment, while representatives Bain Capital could not be reached.

A spokeswoman said Toshiba Memory plans to provide sufficient information to the consortium to allow the new management to make decisions in a timely and appropriate manner.

Meanwhile, the consortium’s bid is not over the finishing line yet.

Rival bidder Western Digital says Toshiba is in breach of its joint venture contracts. The companies jointly operate a flash memory chip plant in Japan. Western Digital has requested a U.S. court injunction and a hearing is scheduled for mid-July.

Terry Gou, the outspoken founder of Taiwan’s Foxconn, the world’s largest contract electronics maker and another bidder in the auction, still saw scope for his company’s bid to succeed given some of the uncertainties around the consortium’s structure.

He also questioned the Japanese government’s involvement in the auction, contrasting it with his own experience of raising investment.

“I haven’t gotten any government money,” Gou told reporters at his company’s annual general meeting on Thursday. “I haven’t asked for a single dollar from the Taiwan government.”