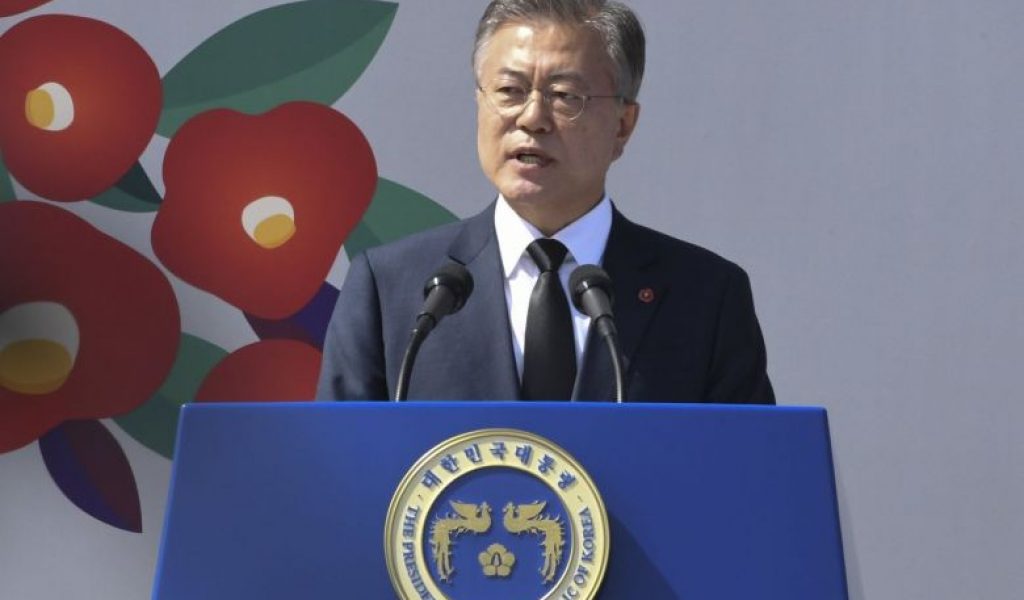 SEOUL (BLOOMBERG) – Facing persistent trade tensions with China and the US, South Korea is deepening ties with Vietnam, which is on course to surpass the US as Korean companies’ second-biggest export market.

South Korean President Moon Jae In is looking to expand trade with South-east Asia as one way for corporate giants such as Samsung Electronics Co. to diversify production bases and export markets.

Seoul sees the US under President Donald Trump as an increasingly demanding and unreliable trade partner, while tensions with China over the US Thaad missile-defence system have dragged on for more than a year.

Korean companies have long built factories in Vietnam but the Thaad dispute has made Vietnam more attractive as a production base and an export market, said Kim Ill San, a director at the Ho Chi Minh City branch of the Korea International Trade Association.

One result is that South Korea’s exports to Vietnam rose by nearly half in 2017 alone, and have more than doubled over the past three years. Vietnam is now expected to become South Korea’s No 2 export market by 2020, according to the trade association.

“Korea mostly sells intermediary and capital goods to Vietnam, but as Vietnam’s economy grows, there will be bigger room to sell consumption products,” Kim said.

In a meeting on Monday (April 2) explaining his March visit to Vietnam, Moon said growing trade protectionism and trade conflict between US and China could hurt the Korean economy, and he urged the country to prepare. Finance chiefs from South Korea and Vietnam agreed to meet annually to expand economic cooperation, the South Korean ministry said in a separate statement.

Companies like Samsung and Lotte Group are leading the way as South Korean investment in Vietnam, once focused on labour-intensive sectors such as textiles, increasingly goes into electronics manufacturing, services and retail.

South Korea is now the biggest foreign investor in Vietnam, with total direct investment reaching a record-high US$7.4 billion (S$9.7 billion) through the first 11 months of last year, according to the Korea Trade-Investment Promotion Agency. And it overtook the US as Vietnam’s second-largest trading partner last year. About a third of South Korea’s shipments to Vietnam are semiconductors and displays destined for electronics production lines, the trade-promotion agency said.

With a fast-growing economy and a young population, Vietnam also offers an attractive market for retailers. Its economy expanded 7.4 per cent in the first quarter from the same period a year earlier, and a third of its population is aged 15 to 34.

In the retail sector, Lotte Group, which came under fire in China over its role in the Thaad deployment, is seeking to sell its hypermarket stores there, yet plans to increase the number of retail stores in Vietnam by more than six-fold by 2020 – to 87 from 13.

E-mart Inc, South Korea’s largest operator of discount stores, is building a second store in Vietnam after withdrawing from China due to poor sales.

South Korea’s investment is helping fuel growth and prosperity in Vietnam. Samsung says it employs 100,000 people at its plant in Hanoi, while the number of its affiliate companies and suppliers is estimated to be around 300.

Speaking in Hanoi last month, Moon described the growing relationship with Vietnam as a win-win deal.

Those ties look set to deepen. During Moon’s visit to Vietnam, the two countries and their companies signed 18 memoranda of understanding. It’s part of what Moon calls his New Southern Policy, strengthening connections with members of the Association of Southeast Asian Nations while reducing economic and diplomatic reliance on China and the US.

To be sure, expanding trade and production in Vietnam will only provide a limited buffer against Trump and Beijing, particularly if trade tensions worsen further. Many of the products South Korean companies are making in Vietnam are destined for the US and China.

“Vietnam and Asean can’t be alternatives for the US and China, but they are new, complementary markets to prepare against shocks in the two big economies,” said Kwak Sungil, a director at the Korea Institute for International Economic Policy, a government-affiliated think-tank.