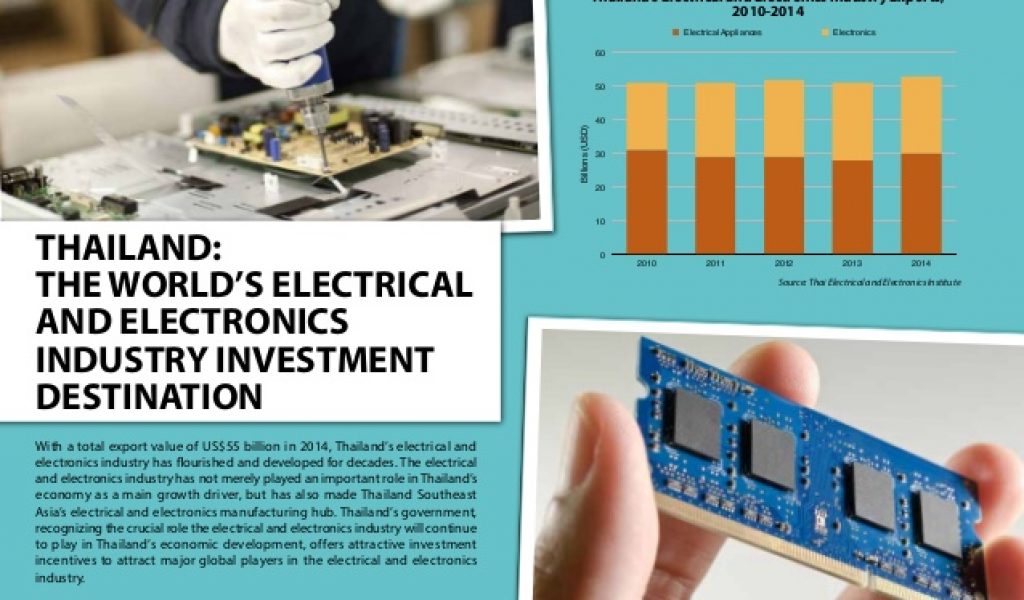 With a total export value of US$55 billion in 2015, Thailand’s electrical and electronics industry has flourished and developed for decades.

According to the Federation of Thai Industries, electrical and electronics exports are expected to increase by nearly 10% in 2015.

Attractiveness is evident in the many global electrical appliance manufacturers that already have plants in Thailand, including: Bosch & Siemens, Daikin, Electrolux, Fisher & Paykel, Haier, LG, Panasonic, Samsung, and Toshiba. Based on export values, Thailand’s major electrical appliance products were air conditioners and refrigerators.

The major export destinations for Thailand’s electrical appliances in 2014 were ASEAN, the USA, Japan, China, and India.

ASEAN was the largest export market for Thailand’s electrical appliances, with total value of US$4.3 billion in 2014, a 15% increase from 2013.

ELECTRICAL APPLIANCE INDUSTRY Thailand is one of ASEAN’s largest production centers in the electrical appliances sector and globally recognized for its manufacturing competency.

Besides being the world’s 2nd largest producer of air conditioning units, Thailand’s expertise in refrigerator production is world class.

In 2014, the global household appliance manufacturer Arcelik announced it would build its first ASEAN plant in Thailand. The US$98 million plant will focus on refrigerator production with the goal of producing one million refrigerators annually.

Having two of the global data storage manufacturers, Western Digital and Seagate, has made Thailand the second largest data storage product producer and exporter in the world.

At the same time, Thailand holds an equally renowned reputation in the IC and semiconductor sectors due to Thailand being one of the main manufacturing bases for these products in the ASEAN region. Companies that have already taken advantage of Thailand’s dynamic industry include world-class companies: Fujitsu, LG Electronics, Seagate, Sony, Samsung and Western Digital. These companies have established facilities for a diverse scope of purposes, from production and assembly to testing and R&D.

Thailand’s electronics industry, embracing the new digital age boom, has seen exports rise to US$32 billion in 2014. The primary markets for these exports were the USA (19.5%), Hong Kong (19.3%), ASEAN (14.3%), China (10.8%) and Japan (7%). Increasing demand for electronics saw imports rise to US$27 billion with mainly printed circuits and IC being imported to supply Thailand’s increasingly advanced electronics manufacturing ecosystem.